Biography
Once called the Grand Old Lady of Pueblo Art, Tonita Peña (Quah Ah) was the first Pueblo woman to challenge gender roles in art production. Up until the early 1900s, men painted village scenes and carved sacred objects, such as Katsina dolls, while women worked in weaving, basketry, and pottery. Peña's remarkable talent in painting not only allowed her work to become highly collectible, but it also emphasized her individual ability and the value of Pueblo culture.

Peña's work provides a window into Pueblo daily activities and ceremonial events, such as Katsina dances. Using a similar style to other Pueblo watercolorists, she depicts her figures close to the picture plane, while her backgrounds are absent of color or detail. Although the figures are first sketched in graphite, they have a spontaneous quality resulting from Peña's use of loosely flowing color washes that complement the movement of the dancing figures. 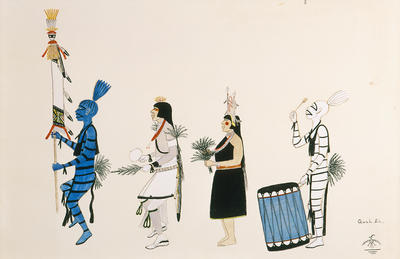