Biography
Tony Walton was born in Surrey, England, and received his education at Radley College, Oxford, and City of Oxford School of Art, London. Prior to his work as a designer for the stage, Walton was employed as a commercial artist for an advertising firm. He was also a book and magazine illustrator, designing for such publications as Vogue, Harper's, and Playbill.
Walton's work in theatre has not been limited to scene and costume design. From 1958-60, he was director of Spur Productions Ltd., and in 1963, joined the partnership of Harold Prince and Richard Pilbrow to form Forum Ventures, the producing company which presented A Funny Thing Happened on the Way to the Forum , a production designed by Walton. In this production, Walton gave the audience a highly stylized version of ancient Rome with exciting cubistic rooftops and multiple planes to create a false sense of third dimension, characteristic of his very personal style.
Recognition of his skill as a designer came when he was awarded a Tony and a Drama Desk Award in 1973 for his designs for Pippin.
In addition to his theatre credits, Walton has served as consultant and production designer for several films including Mary Poppins, The Boyfriend, Murder on the Orient Express, and All That Jazz. 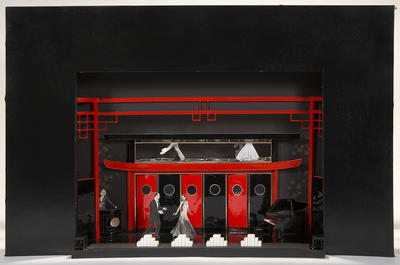