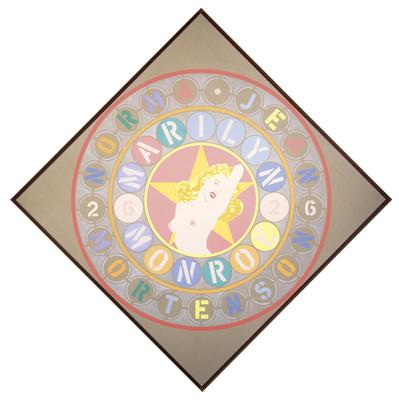 The Metamorphosis of Norma Jean Mortenson

Further information
This painting was first exhibited in 1967 at Sidney Janis Gallery in New York, in the exhibition, Homage to Marilyn Monroe. A tribute to the pop culture icon and symbol of the struggle for the American Dream, Indiana's work alludes to Monroe's untimely death just five years prior. According to the artist, the letters of the actress's two names are "encircled by the telephone dial-like ring of her destiny and death (it was this instrument she was clutching)" - a reference to how Monroe's body was found in her Los Angeles home. The sensuous image derives from Tom Kelley's 1949 photograph that was chosen for the first issue of Playboy in December 1953. It also appeared in the famous calendar of nudes, "Golden Dreams," which the artist picked up in a Greenwich Village shop. For his painting, Indiana altered the photograph's original red velvet background, posing Marilyn "against the golden star of her dreams."

Documentation
Sidney Janis presents an exhibition of work by leading artists in homage to Marilyn Monroe for the benefit of the Association for Mentally Ill Children in Manhattan; 1967; no. 24
Modern Art at the McNay: A Brief History and Pictorial Survey of the Collection; William J. Chiego; 2001; p. 208

The Metamorphosis of Norma Jean Mortenson 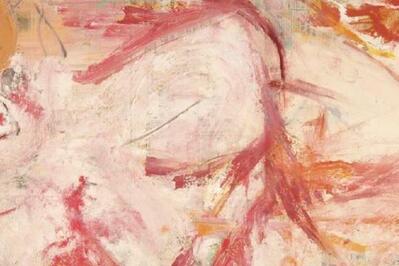