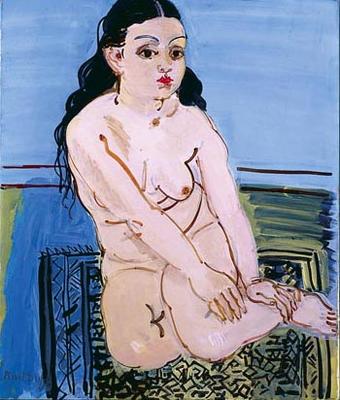 Further information
In the late 1920s, Raoul Dufy began a series of nudes set against the patterned rugs and vibrant blue walls of his Paris studio. Dufy’s brushwork has been compared to spontaneous calligraphy where, combined with large patches of color, the artist quickly reduces to the essential details. The color blue, recalling both sky and water, is a continual touchstone for Dufy, who grew up in the French port city of Le Havre and frequently visited the Mediterranean coast where he painted Golfe Juan.