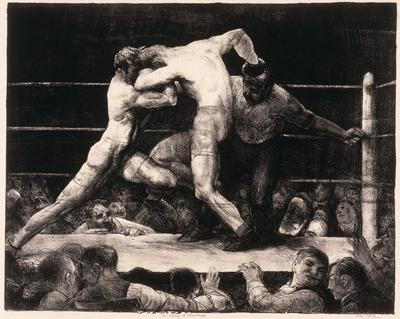 A Stag at Sharkey's

Credit line
Gift of the Friends of the McNay

A Stag at Sharkey's is a landmark in the history of American printmaking. Two prizefighters, illuminated by a harsh, artificial light, burst forth from the darkness of a gritty, smoky underground boxing club. Bellows has beautifully described the bodies of the boxers as well as their stances in the ring, creating a composition of such balance and grace that it could have been taken from a Greek frieze. However classical the two fighters might appear, the crowd is obviously seedy and modern. Faces- many inspired by Daumier's mobs- grimace and contort in the excitement of watching a blood sport in which the ultimate pleasure is seeing one of the contestants beaten to death. Bellows borrows from the classical, from Daumier, and from his own observations to create a masterpiece. While the scene appears completely realistic, it is wholly contrived. The ropes around the boxing ring, for instance, only encircle two of the visible sides. The side facing the viewer is open; it has no ropes. This bit of artifice places the viewer in two places at once: in the ring with the fighters and in the pit with the audience.

A Stag at Sharkey's 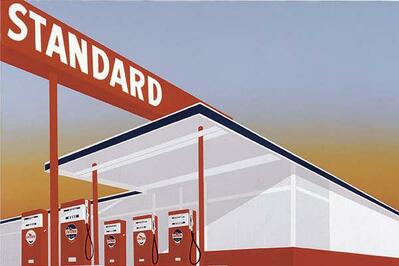