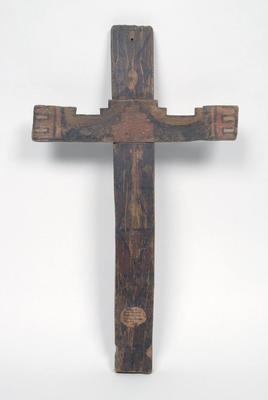 Cross from the old Pecos Church

Further information
During the colonial period (1598-1821), Franciscan friars forced Pueblo Indians to adopt Christian practices and become Catholics. Despite the effort to convert them, Pueblo Indians subtly transformed the meanings of Christian images and incorporated them into their own practices. This cross, which stands for the crucifixion of Christ, is decorated with Pueblo imagery such as the terrace motif representing rain and fertility.

According to an old label attached to the cross, this object was collected before 1828 from the ruins of the mission church at Pecos Pueblo (originally called Cicuique and located 18 miles southeast of Santa Fe). The Indians of Pecos, trained by Spanish artisans, were regarded as fine carpenters beginning in the early 1600s.

Cross from the old Pecos Church