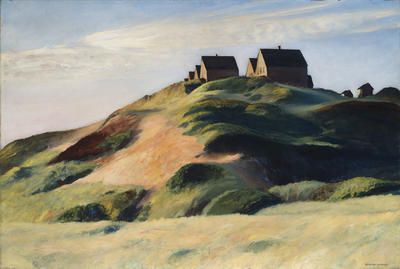 Further information
"Maybe I am not very human. What I wanted to do was paint sunlight on the side of a house." - Edward Hopper, 1962

Corn Hill illustrates Hopper's comment about his many paintings of houses -- houses that are, in this scene, the only sign of humanity. Low sunlight streams up the sides of the dwellings, bestowing a haunting loneliness found in many of Hopper's paintings.

Hopper painted Corn Hill during the first of many summers he and his wife, Jo, spent in South Truro on Cape Cod. Corn Hill received its name from the Mayflower pilgrims who, in 1620, stole a cache of corn from the local Nauset tribe, thus saving themselves from starvation. The Pilgrims later returned to compensate the Nausets for the loss of their corn seed stock. 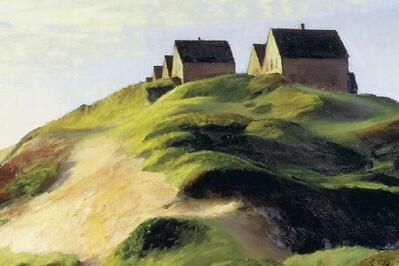