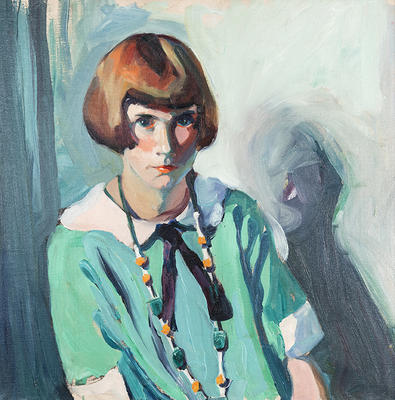 Further information
Jane Peterson’s subject wears a fashionable dress that loosely drapes over her body. Her hair is in the short bob style popularized by flappers of the Jazz Age. These styles differ vastly from the constrictive corsets women previously wore to make their waists appear thinner, and the elaborate hairstyles constructed with pins and combs. Why the change in fashion? The end of World War I brought a sense of greater freedom for women, while the 1920 passage of a constitutional amendment granting the right to vote to women further added to the advent of an emboldened modern American woman.