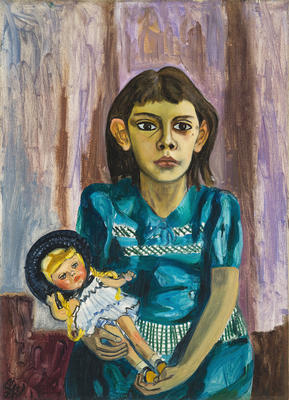 Julie and the Doll

Further information
Alice Neel is known for her expressionistic portraits of family, lovers, neighbors, artists, and strangers, many of whom were members of her community in Spanish Harlem, a neighborhood in New York where Neel lived. Here, Julie - the daughter of Neel's neighbor - holds a blond, blue-eyed doll as she gazes beyond the viewer.

Julie and the Doll illustrates the racial divide prevalent in American communities. Similarly, the photographer Gordon Parks captured this divide in his photographs for Ebony magazine, documenting a social experiment wherein African American children were asked to choose between black and white dolls. The results of this experiment assisted in the Supreme Court's monumental decision in Brown v. Board of Education that required the racial integration of American public schools in 1954.

Julie and the Doll