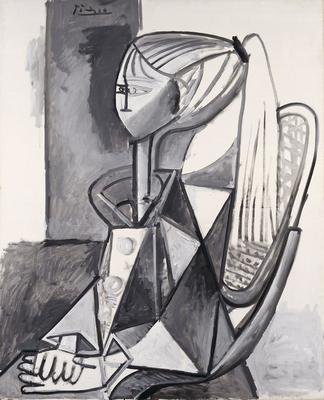 Further information
One of forty portraits of Sylvette David that Picasso made during 1954, Portrait of Sylvette depicts a stylish and beautiful young French woman who met the artist while she and her fiancé stayed with her mother in the south of France. The portraits range from realistic to abstract and were painted on canvas, drawn on paper, painted on china plates, and rendered in sculpture.

Since the early 1930s, Picasso had frequently painted a seated woman in profile. As in other works, he has altered Sylvette's face to show both sides. The artist represented Sylvette's face, neck, hair, hands, and rocking chair with fluid lines, while forming her body and a small space behind her back with triangles in white, grey, and black. This arrangement focuses the viewer's interest on the sitter's pony tail and clothed body rather than on the face, as in traditional portraits.

While the triangular forms in Portrait of Sylvette relate to Picasso's earlier Cubist works, the restraint of the figure contrasts with his previous depictions of seated women. Art Historian William Rubin speculates that this containment reflects the artist's lack of intimate involvement with Sylvette David, as well as Picasso's tendency to translate the dynamics of his relationships with other women into passionate colors and forms.