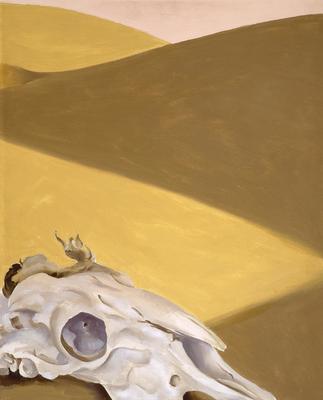 Further information
O'Keeffe's interest in bones began in Texas, where she found them near Amarillo and brought them into her art classroom at West Texas State Normal College, Canyon, for her students to see. To her, they suggested life, not death, symbolizing the desert's dual nature of majesty and harshness: "The bones seem to cut sharply to the center of something that is keenly alive on the desert, even tho' it is vast and empty and untouchable - and knows no kindness with all its beauty." (O'Keeffe quoted in Goodrich and Bry, 1970, p.23).
Skull imagery appears in her work beginning in the 1930s and continues into the 1960s. At first, she painted cow skulls from close range, hanging them in front of cloth backgrounds. In the 1940s, O'Keeffe started painting profiles of a variety of skulls. She also depicted fragmented skulls, juxtaposing them with realistic or fanciful desert landscapes. In Goat's Head, O'Keeffe shows the top of a goat's skull in the lower foreground, with numerous triangular patches of alternating ochre, yellow, and pink that suggest the desert landscape.
In contrast to some of O'Keeffe's works that feature vast desert scenes, this small composition focuses on a few sand dunes, cropped closely as in a photograph. The cropped focus on an object appears in the artist's earlier flower, shell, and leaf paintings, which visually relate to photographs from the late 1900s and early 1920s.