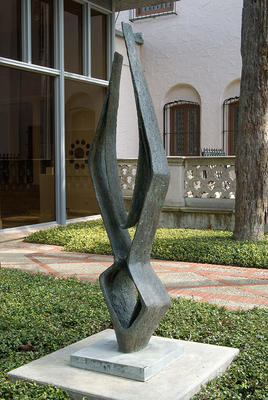 Further information
Cast from a mold that consisted of aluminum covered wtih plaster, Barbara Hepworth's Cantate Domino is one of an edition of six. Several were exhibited internationally, including in an exhibition that toured the United States, the Sao Paulo Biennial, and a retrospective at the Galerie Chalette in New York, where Tom Slick acquired this sculpture in 1959, along with Reclining Figure (Landscape Rosewall) and Winged Figure II, also in the McNay collection. The sculpture's Latin title translates to "sing unto the Lord," from the first line of Psalm 98. In a 1963 text on Hepworth, poet Michael Shepherd interpreted the sculpture as evoking upraised hands. Barbara Hepworth's Tate Gallery retrospective catalogue extended this interpretation and compared it to Albrecht Durer's drawing Praying Hands, made in 1508. Hepworth may have agreed with Shepherd's assessment, as she apparently wanted the sculpture as her headstone and considered it a prayer, rising up against despair brought on by events of the day. When considered horizontally, the work's triangular shapes suggest an abstract hilly landscape, an association Hepworth also used frequently for such forms. In Psalm 98, humans join nature as beings that praise God.