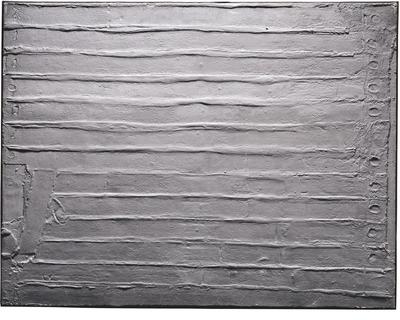 Further information
Antoni Tàpies was among the European artists after World War II who used discarded materials such as newspaper, string, scraps of fabric, and straw. The French named this European variation on gestural painting Art Informel, literally "unformed art." Making art that evokes the real world without representing it, Tàpies calls attention to seemingly inconsequential substances and suggests that beauty appears in unlikely places.

Tàpies created Grey Borders by applying coarse, grey concrete to a wooden panel. Thirteen horizontal ridges protrude, creating as many recessed bands and making the work like an ornamental wall. Round indentations punctuate the right end of eleven bands and the left edge of two bands. Various indentations on the left side mark other bands. Toward the lower left corner, a vertical smear of concrete interrupts the band pattern. During Tàpies' youth in Barcelona, Catalonia, he experienced the harshest repression of Francisco Franco. Tàpies called walls the "witnesses of the martyrdoms and inhuman sufferings inflicted on our people."