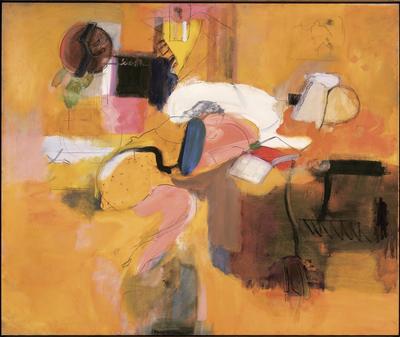 Further information
In the late 1940s, Larry Rivers left a career as a professional jazz musician and eventually took up art. He began by studying with German emigre Hans Hofmann, known for his contrasting warm and cool, "push-pull" colors that created space and movement. Relying heavily on gestural application of paint, Rivers felt an affinity for Willem de Kooning's use of vivid color and fragmentation to depict the figure. In the 1950s, Rivers' figural work represented an alternative to the nonobjective paintings of Abstract Expressionism.

As the title suggests, Blocks: Yellow, Orange contains blocks of color, as well as a figure in an interior setting. In the center, light outlines and patches of yellow, pink, grey, and blue suggest a woman lying on a bed with knees bent, perhaps reading a book or magazine. In a black area to the left of the figure, the name "Schuster" appears and other words are printed above it. Above the woman is the suggestion of a large male torso with brownish-yellow coat lapels forming a V. Contrasting colors move the eye around the composition, creating a greater sense of space and implying other identifiable objects. The prevalence of orange accented with pink relates to de Kooning's paintings, including Eddy Farm. Forms and text in the upper left anticipate Pop works by Rivers from the 1960s.