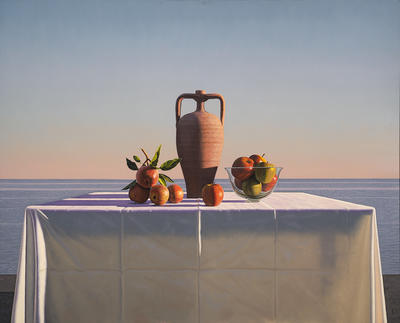 Still Life with Apples and Vessel

Further information
David Ligare's paintings are deeply informed by the art and philosophy of Greco-Roman antiquity. Still Life with Apples and Vessel belongs to one series in which the artist finds inspiration in the Greco-Roman tradition of "first-fruit" offerings. Such gifts, typically vegetables, fruit, and wheat, were given in thanks to the gods for successful harvests, hunts, and other undertakings. Painted examples of such offerings have been found in Pompeii and Herculaneum. In some cases, ceramic fruit or paintings of such gifts were used as stand-ins for the real thing. These stand-ins were thought to possess magical properties that made it possible for them to become the things they depicted. Inspired by this idea, Ligare calls his still lifes Aparchai paintings after the Greek word for "gift of thanks."

Still Life with Apples and Vessel

Thank you for posting this lovely and relevant painting.