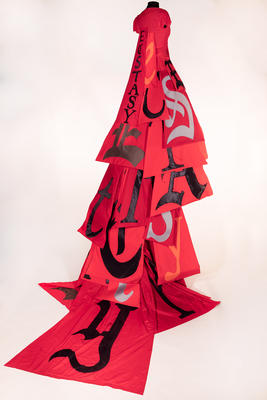 Credit line
Gift of the artist

Further information
Literature and poetry are constant sources of inspiration for Lesley Dill, who has degrees in English and philosophy. In 2008, Dill produced Divide Light, an operatic interpretation of Emily Dickinson's complete works. During the opera, performers sing Dickinson's words while wearing elaborate costumes designed by Dill. The Red Ecstasy Dress featured in the opera's final scene was inspired by Dickinson's poem fragment, "Take all away from me, but leave me Ecstasy." As the performer climbs a ladder with her back turned toward the audience, the red dress unrolls like a scroll.