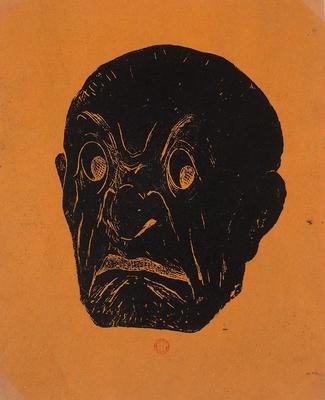 Further information
Henri Guérard, whom Edouard Manet called the greatest etcher of his day, was a leading proponent of Japanese art. Much of his art, like Masque Japonais, a study of a Japanese theatrical mask, deals with specific Japanese motifs and subjects.

Guérard's prints reveal just how experimental nineteenth century French printmakers could be. Instead of using a square or rectangular copper etching plate, Henri Guérard actually used a plate in the shape of the Japanese mask he represents. Further playing around with the tools in the printmaker's toy box, he first inked the plate as a relief print. In other words, the ink was left on the surface of the plate, not in the etched lines that appear white in the variant impression.