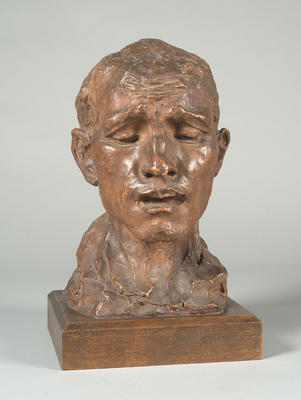 Further information
To end the year-long standoff during the Hundred Years War (1337-1453) six leading citizens of Calais (a town in northern France) agreed to surrender their lives in exchange for King Edward III’s merciful treatment of the French port. Commissioned to honor their sacrifice with a monument, Rodin captures genuine expression of emotion in this early terra cotta study. He introduces distortions for expressive effect, such as the indention of the upper lip, distinctive nose, and mismatched ears. In comparing the terra cotta head with the bronze reduction (see 1963.1.2), notice Rodin’s emotional rendering of the roughly modeled hair, furrowed brows, downcast eyes, and open mouth.