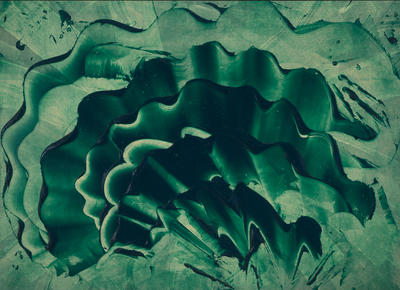 Further information
Plains Pine is from Darby Bannard's Scallop Series. From 1981 to 1983, while working in his studio in Pine Plains, New York, Bannard "developed a kind of gel 'drawing' on canvas and on large sheets of fiberglass paper...by pushing out concentric scalloped bands of colored gel with a large, homemade squeegee." The blue-green monochromatic canvas recalls the fluidity of the ocean, as well as the organisms that inhabit its depths. Bannard has described the role of nature in his work as being more conceptual than representational, stating that his paintings are "naturalistic, not because they look like nature as we see it, but because they [are] surfaces made the way nature makes surfaces." (Walter Darby Bannard: Paintings from the 70s and 80s, Miami-Dade Community College, 1990)

shape of water but in a painting