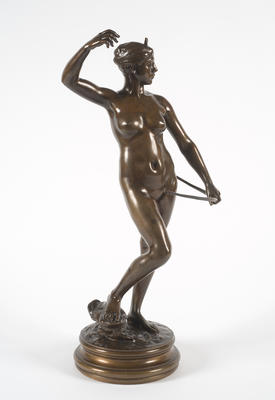 Further information
Jean Alexandre Joseph Falguière was the epitome of the successful academic artist and was prolific in his output. His many statues of female nudes were especially popular and gained him some notoriety. Diana, his best known work, was editioned extensively in reduced versions. Head of Diana (see 2014.23), abstracted by Falguière from the full figure bronze, was one of the most successful idealized heads of the late nineteenth century. Contrast the erotic smooth finish of the full figure with the jagged, irregular truncation of the bust that stresses the disdainful and haughty effect of the face. These two sculptures demonstrate the entrepreneurial spirit of French sculptures in the nineteenth century, regularly mining their own work to answer a growing middle class market for art.