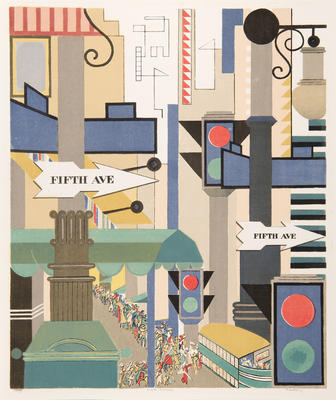 Further information
Mildred Rackley must have been aware of Stuart Davis's print Sixth Avenue El when she created her masterful Fifth Avenue just five years later. Though it is not known if the artists knew each other, they did participate in at least one exhibition together, and Rackley seems to have absorbed Davis's sense of the cacaphonous movement of American urban life. In Rackley's work, however, the movement is not so much side to side but back and forth. Our eye moves into and out of the picture plane, taking in the details of the cityscape. Her use of repeated patterns, like the lines of triangles throughout the image, give the print the same sense of energy as Sixth Avenue El. Like Davis, Picasso, and Braque, she blurs the line between abstraction and representation. The repeated street lights, for instance, are understood in the context of the overall composition, but the one Rackley placed at the fore of the picture plane in the lower right corner could be read as a geometric abstraction of red and green circles on a grey rectangle.