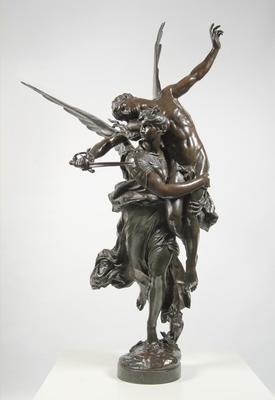 Gloria Victis! (Glory of the Vanquished)

Further information
One of the most admired and editioned sculptures of the late 1800s in France, Gloria Victis! was conceived by Mercie while he was a student at the French Academy in Rome. The sculpture was originally executed with the figure of Fame supporting a victorious soldier, but Mercie replaced him with a defeated soldier upon receiving the news that France had surrendered to Prussia, ending the Franco-Prussian War. Gloria Victis! became an instant classic, its appeal both patriotic and aesthetic. Commemorating heroism in defeat, it served to console the nation after a bitter loss.

Gloria Victis! (Glory of the Vanquished)