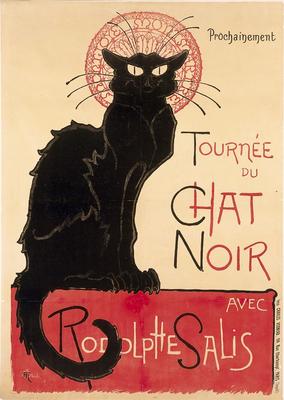 Credit line
Gift of the Friends of the McNay

Further information
Large-scale lithographs such as this served as advertisements in 1890s Paris. This print advertised Le Chat Noir (The Black Cat), a famed cabaret in the Parisian suburb of Montmartre. One the club’s founders, Maurice Donnay, declared that its purpose was “to spread enjoyment to all men through all of life’s situations.” The end of the nineteenth century witnessed the gradual dissolution of class distinctions in France, so clubs like Le Chat Noir were patronized by a diverse clientele. The cabaret provided entertainment and a means of escape from the trials of everyday life, and it served as a venue for artistic and intellectual dialogue. A familiar figure in French folklore, the black cat traditionally appeared to punish rebellious children, or occasionally as a séducteur. In Montmartre, the black cat was commonly recognized as a symbol of artistic freedom; thus the name of the establishment, chosen by owner Rodolphe Salis.

Documentation
Modern Art at the McNay: A Brief History and Pictorial Survey of the Collection; William J. Chiego; 2001; p. 67