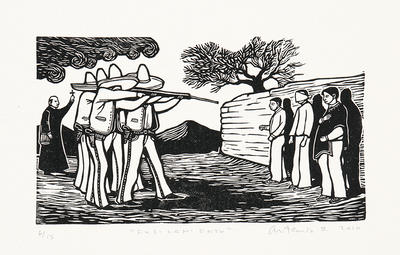 Further information
Conceived to commemorate the centennial of the 1910 Mexican Revolution, this portfolio includes portraits of many of the key players in the epic struggle to overthrow the dictator Porfirio Díaz. The images are linocuts, many based on contemporary photographs of Díaz (seen in his full, Eurocentric military regalia), Emiliano Zapata, and others. Stylistically, the works hark back to the relief prints of José Guadalupe Posada.

Rodriguez collaborated with Juan Pascoe on the portfolio, with Pascoe providing the letterpress text for the title page.

Fusilamiento (Execution by Firing Squad) is a reminder of the human toll of the Revolution. Firing squads were a common method of killing one's political opponents. Porfirio Díaz famously ordered his forces to kill rebels "en caliente," which is akin to saying in English "kill them on sight, no questions asked." Estimates of the number of people killed during the Revolution range from 1 million to 3.5 million.