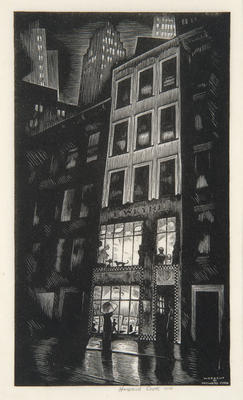 Greetings from the House of Weyhe

Further information
The Weyhe Gallery on Lexington Avenue in New York City was a nexus of printmaking in the 1920s and 30s. Director, Carl Zigrosser, championed the work of many artists including Mabel Dwight and Howard Cook. Every year, the Weyhe Gallery commissioned one of the artists it represented to produce a greeting card for the holidays. In Howard Cook's card of 1929, Cook decided to show the outside of the iconic gallery on a rainy night. Look very closely through one of the windows; you'll see the gallery's resident cat curiously investigating a fish sculpture. This proof of Cook's wood engraving was printed before the addition of the holiday greeting at the bottom.

Greetings from the House of Weyhe