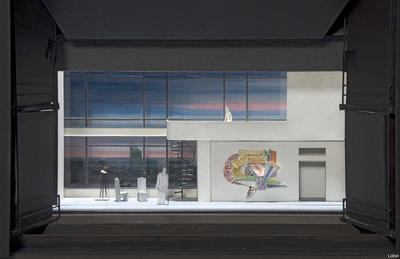 Maquette for Le Nozze di Figaro (The Marriage of Figaro)

Media/Materials
Painted wood with watercolor, colored pencil, and graphite on paper and board, with photographs, plastic, and wire

In Sellars' production, the Count and Countess Almaviva reside in a penthouse with minimalist furniture and modern art, including a relief by Frank Stella. Their valet, Figaro, and maid, Susanna, set up housekeeping in a laundry room with a pullout sleeper sofa. Originally an Enlightenment-era critique of the inherited privilege of the aristocracy, this production of The Marriage of Figaro commented on the growing income gap in Reagan-era America, dominated by "trickle-down" economic theory.

With its sensuous curves and luscious colors, Stella's sculpture is a bit out of place in Lobel's otherwise minimalist design. This "rococo" element is a witty reminder of the opera's original 18th century context.

Maquette for Le Nozze di Figaro (The Marriage of Figaro)