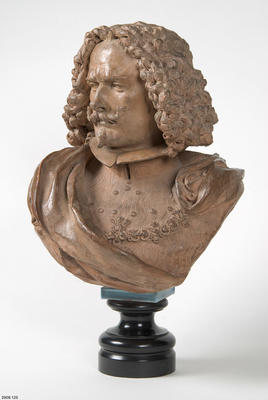 Further information
The bust of the great Spanish painting Diego Velázquez (1599-1660) by Albert-Ernest Carrier-Belleuse demonstrates the 19th century revival of terra cotta sculpture under the inspiration of 18th century masters of the medium. Carrier-Belleuse, one of the most prolific sculptors of the era, fully exploits the liveliness of modeling and contrasts a variety of textures, both made possible by the medium. Admiration for spontaneity of expression in sculpture was mirrored by the development of Impressionism in painting. The choice of Velázquez as a subject reflects the French love affair with Spanish painting for its realism and bravura brushwork during the 19th century.