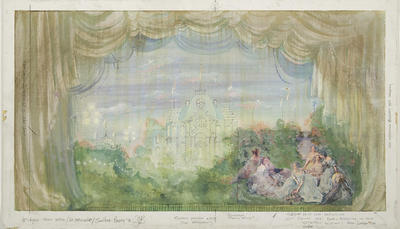 Media/Materials
Gouache, ink, graphite, and collage on board

Further information
A beautiful street singer, La Périchole, becomes a lady in waiting at court. Although the opera is set in Peru, designer John Lee Beatty gave the production the look of composer Jacques Offenbach's own milieu, Second Empire France under Napoleon III and Empress Eugénie.