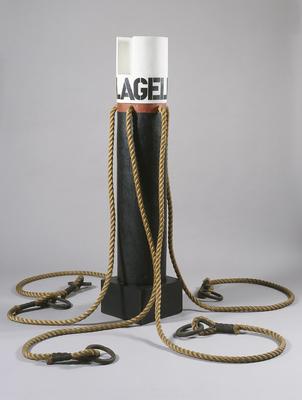 Media/Materials
Oil on wood, with rope and cast iron

Credit line
Gift of The Tobin Theatre Arts Fund in honor of the close personal friendship between Robert L. B. Tobin and Robert Indiana

Further information
In his late 20s, Robert Indiana met a community of artists (including Ellsworth Kelly, Agnes Martin, Jasper Johns, James Rosenquist, and Jack Youngerman) who occupied a group of former shipping warehouses in Lower Manhattan for use as studios. The generous spaces allowed Indiana to open the scale of his work, like this piece, Flagellant. It also provided him with a home among fellow artists who became friends and who influenced one another’s work. Regarding the title of this sculpture, Indiana explained, “The ropes are lying quietly on the floor, but there's always the danger that it will get into motion somehow and, well, flagellate or be used to flagellate.”