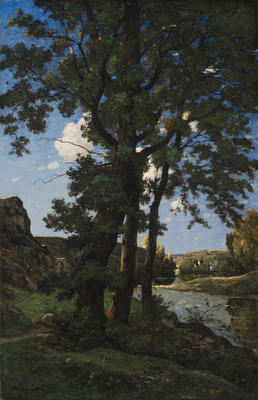 Credit line
Given in memory of Walter F. Brown by his family

Further information
A consummate landscape painter in both oil on canvas and in watercolor, Henri Harpignies’ long career spanned from the 1850s until his death, carrying the Barbizon school’s truth to nature well into the twentieth century. Strongly influenced by Corot, he gradually developed his own style. The picturesque composition seen in Les Chênes du Chateau Renard continues in the classical tradition of French landscape painting. However, the silvery highlights that he uses to distinguish one element in the landscape from another are uniquely his.