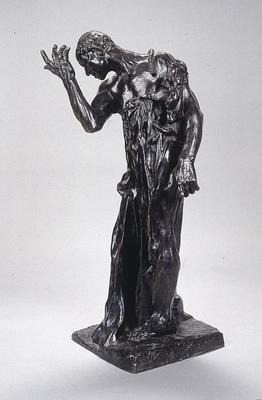 Pierre de Wissant from the Burghers of Calais

Credit line
Museum purchase and Gift of the Tobin Foundation

Further information
Auguste Rodin’s expressive, emotional, and vulnerable rendering of Pierre de Wissant depicts a body wracked with grief. Pierre’s right leg turns uncomfortably inward, his toes curling as if in pain, and his hand raises to shield his face. Wissant was one of six leading citizens of Calais (a port town in northern France) who agreed to surrender their lives in exchange for King Edward III’s merciful treatment of the French city. Rodin captured genuine expressions of emotion in this work, commissioned for a monument to honor the lives almost sacrificed in order to end a year-long standoff during the Hundred Years War (1337-1453).

Documentation
Modern Art at the McNay: A Brief History and Pictorial Survey of the Collection; William J. Chiego; 2001; p. 40-41

Pierre de Wissant from the Burghers of Calais