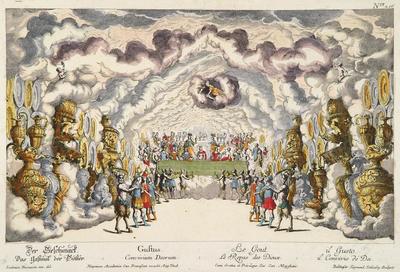 Gustus (Taste): The Banquet of the Gods from Il Pomo d'Oro

Theatre production
Opera with music by Antonio Cesti and libretto by Francisco Sbarra. Performed at the court of Leopold I, Vienna, 1668.

Further information
In Act I of Il Pomo d'Oro, Discord interrupts the banquet of the gods on Mount Olympus by flying in and dropping a golden apple in their midst. Inscribed to "the most beautiful," this apple resulted in a famous contest between Venus, Athena, and Juno.
Although the opera was a tribute to Infanta Margherita of Spain, the bride of Leopold I, the engraving of the banquet of the gods was published in the 1700s as a representation of the sense of taste.

Gustus (Taste): The Banquet of the Gods from Il Pomo d'Oro