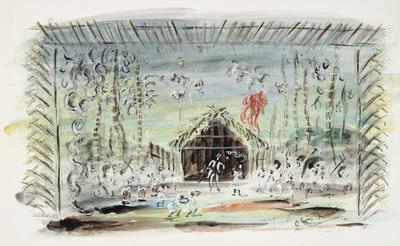 Scene design for House of Flowers

Theatre production
Musical with book by Truman Capote, lyrics by Capote and Harold Arlen, and music by Arlen. Produced at the Alvin Theatre, New York, 1954.

Further information
In his book American Musical Theatre, Gerald Bordman told of the many backstage production problems which plagues House of Flowers. However, he added: "One thing that remained gratefully unaffected were the exquisite pastel delicacies of Oliver Messel's poetically imaginative costumes and sets."

Scene design for House of Flowers