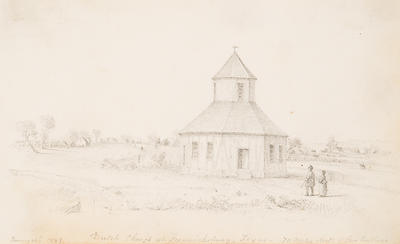 Further information
Fredericksburg, Texas, was founded in May 1846 by Baron von Meusebach, who negotiated a never-broken treaty with the Penetka Comanche Tribe. Built by the early settlers, the Vereins Kirche, or Society Church, served as the meeting place for all religious groups as well as the town's first school and sometime fortress. After being demolished in 1896, the building affectionately known as the Kaffeemühle, or coffee mill, was reconstructed in 1936 for the Texas Centennial.

Eastman had the advantage of seeing the Vereins Kirche in its earliest and most pristine state, documenting its unique architectural details. The lower portion of the octagonal building is made of fachwerk, the European cross-timber construction filled with mortar that the immigrants recalled from their homeland. He also includes the original weather vane in the shape of a rooster, destroyed by lightning in 1862.