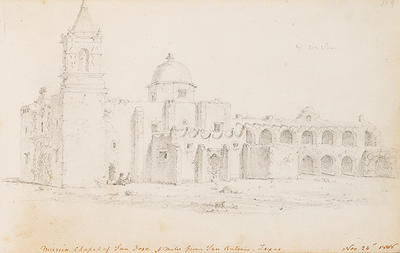 Further information
Eastman wrote very little during his tour and the surviving journal begins August 1, 1849, nine months after his arrival in Texas. He describes their first stop on the way out of San Antonio: "This day was only a start - went to the Mission San Jose five miles and there encamped - Made several sketches during the day - This old Mission was built about 1800 or a little later - very finely constructed with much sculptur in from around and over the Door..."

Eastman's visual note taking draws attention to details still visible on the restored mission today: the sculpture on the sides of the bell tower, the legendary rose window, and the the double arcade of the convento on the right.