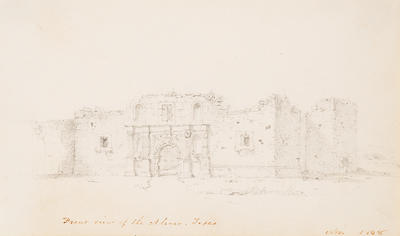 Further information
At the time of Eastman's tour, parts of the Alamo complex were already serving an important role as a quartermaster's depot, supplying troops across the state. In his journal, Eastman wrote: "The Church of the Alamo situated within the wall of the Alamo is in San Antonio at the N. E. corner of town - This is well built and much ornamented - It is present in a worst state of ruin than any of the others..."

Eastman drew the shrine long before it underwent a series of transformations and restorations during the course of the late 1800s and early 1900s. The top part of the Alamo's facade is missing, as is its barrel-vaulted roof.