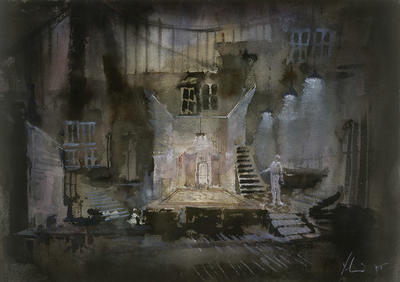 Media/Materials
Watercolor and graphite on paper

Further information
Arthur Miller likened A View from the Bridge, set in a tenement near the docks in Red Hook, Brooklyn, to a classical tragedy. When newcomers arrive from the "old country" of Sicily, the balance in the Carbone family is unsettled. Eddie Carbone's incestuous passion for his niece, Catherine, his resentment against her flamboyant lover, Rodopho, and notions of masculine honor set in motion forces leading to the play's violent denouement.

The silhouette of the Brooklyn Bridge dominates Robert Yodice's scene design for the 1976 Juilliard School production. Following Miller's original stage instructions, "Like the play, the set is stripped of everything but its essential elements."