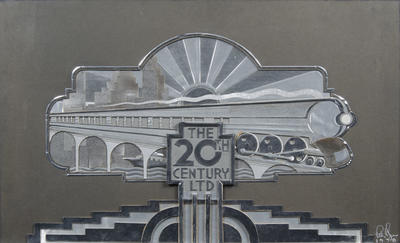 Design for show curtain in On the Twentieth Century

Theatre production
Musical with book and lyrics by Betty Comden and Adolph Green, and music by Cy Coleman. Produced at the St. James Theatre, New York, 1978.

Further information
Robin Wagner received a Tony Award for his brilliant Art Deco designs for On the Twentieth Century. With its streamlined exterior and luxurious suites, the Twentieth Century Limited was fabled for traveling between La Salle Station, Chicago, and Grand Central Station, New York, in only 16 hours.
In this zany musical, an aging actress, a young hunk, an over-the-hill director, a congressman, and a religious fanatic engage in business deals and romantic conquests while they speed along the tracks from the Midwest to Manhattan.

Design for show curtain in On the Twentieth Century