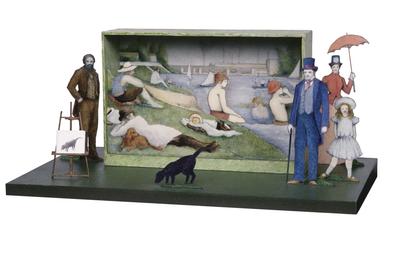 Media/Materials
Painted paper and board, with metal

Theatre production
Musical with book by James Lapine and lyrics and music by Stephen Sondheim. Produced at the Booth Theatre, New York, 1984.

Further information
In Sunday in the Park with George, George Seurat's late Impressionist paintings come to life with all the color, light, order, and harmony the artist sought. In this scene, George shows his Bathers at Asnieres to Jules, a fellow member of the Society of Independent Artists. Jules's wife, Yvonne, grasps the political implication of this painting of working class "boys with their clothes off" remarking that "it might be in some dreary Socialistic periodical."

Taking full advantage of the magic which modern technology can create, Straiges' images pop up from the stage floor, rolling unassisted (or so it seems) off into the wings, vanishing then reappearing. 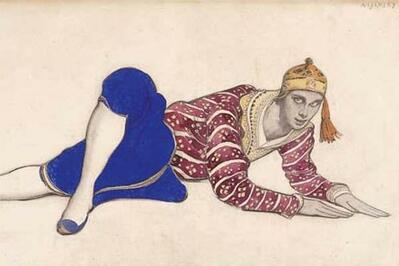