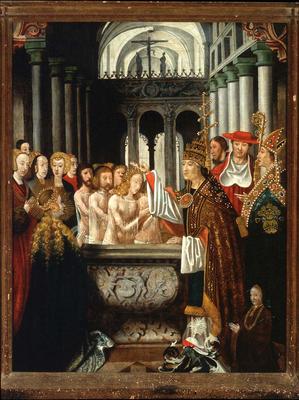 Media/Materials
Oil and gilding on panel, transferred to canvas

Further information
According to a medieval legend, Ursula, a 4th century princess, undertook a religious pilgrimage across Europe, accompanied by 11,000 virginal handmaidens. Ursula and her entourage were massacred around 384 A.D., and because she was martyred, or killed because of her faith, Ursula was canonized as a saint.

This painting depicts Ursula and her attendants inside a Gothic church. Pope Siricius is baptizing a group of the virgin entourage as Ursula, crowned and adorned with jewels, kneels by the baptismal font. A cardinal and bishop stand behind the Pope, and a group of richly-dressed onlookers witness the scene. Kneeling in the lower right corner is the individual who commissioned the painting, her coat of arms beside her.

The detailed reproduction of the costumes and luminous quality of the figures create a lively juxtaposition against the sacred atmosphere of the architectural space. The spiritual and material are visually intertwined, as the figures perform a solemn act of ritual.

Maker
Master of the Legend of Saint Ursula (Flemish, b.1436)