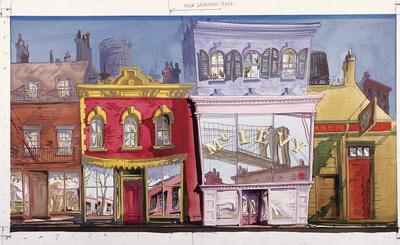 Scene design with McLevy's Window in A Tree Grows in Brooklyn

Media/Materials
Watercolor, ink, and graphite on board

Further information
Betty Smith and director George Abbott drew upon ethnic stereotypes and idealizations of the immigrant experience. Johnny Noland is an Irishman who vows to make a fresh start, but succumbs to alcohol. His wife Katie promises that their baby, Francie, will get an education. Francie is the first member of the family to finish eighth grade, but her father does not live to see it.

Scene design with McLevy's Window in A Tree Grows in Brooklyn