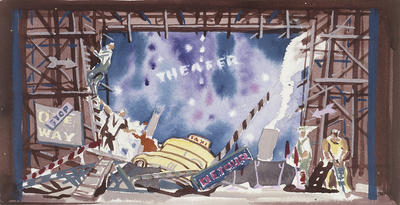 Scene design for A Pair for Tonight, Opening Scene, in Dance Me a Song

Media/Materials
Watercolor and graphite on paper

Further information
Designer Jo Mielziner suggested the idea for the opening scene in the musical revue, Dance Me a Song. Titled "A Pair for Tonight," it portrayed the trials and tribulations of traffic in midtown Manhattan as a husband and wife make their way to the theatre in a taxi through a maze of construction.
Mielziner's settings were described as "beautiful" and "ingenious." However, the New York Times dismissed the revue's music and sketches as merely "mediocre," and Dance Me a Song closed after only 35 performances.

Scene design for A Pair for Tonight, Opening Scene, in Dance Me a Song