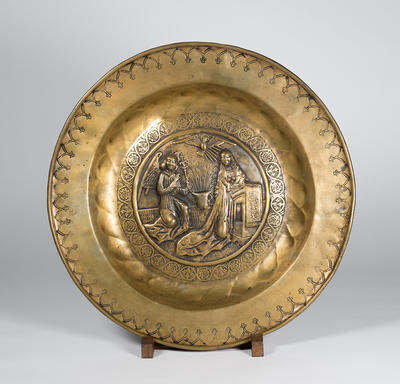 Further information
Decorative brassware, called dinanderie, after the city of Dinant in Flanders (now Belgium) where it was mass-produced, was used in both domestic and liturgical settings. After the 1466 sack of Dinant, many brasswork artisans fled and settled throughout the Netherlands and Germany. This plate features a biblical scene found repeatedly on metalwork from the 1400s: the Annunciation, when the angel Gabriel tells Mary she will give birth to Jesus. The image derives from the Biblia Pauperum, or The Poor Man’s Bible, which features illustrations based on engravings by Master ES (active ca. 1450-67).