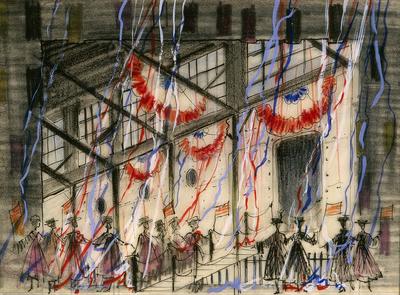 Scene design for Home Again, Act I, scene 2, in Fiorello

Further information
Fiorello Laguardia (played by Tom Bosley) returns home from World War I and resumes the political career that made him a three-term mayor of New York City from 1934 to 1945.

In the design by Jean and William Eckart, newsreel footage fades into the staged homecoming, complete with red, white, and blue streamers.

Scene design for Home Again, Act I, scene 2, in Fiorello