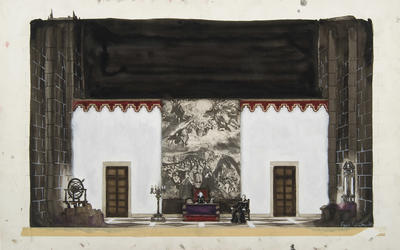 Further information
The Adoration of the Name of Jesus by El Greco dominates Donald Oenslager's design for the scene in which Philip II contemplates killing his own son, Don Carlos. Most likely commissioned by Philip II, El Greco's painting would seem to comment on the Spanish monarch's moral dilemma.

Note: Verdi's opera is based on the life of Prince (or Don) Carlos (1545-1568), son of Philip II of Spain. However, when the opera is performed in Italian, he is usually called "Don Carlo."