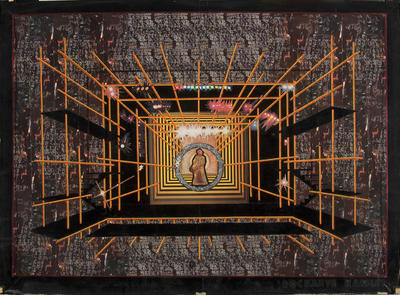 Media/Materials
Photocopy and collage with watercolor and glitter on board

Further information
In his designs for Rockabye Hamlet, a rock-musical version of Shakespeare's Hamlet, Lundell used "pop" materials such as photocopying and glitter on a minimalist design of platforms and poles, transforming the Elizabethan classic into a 20th century vernacular.