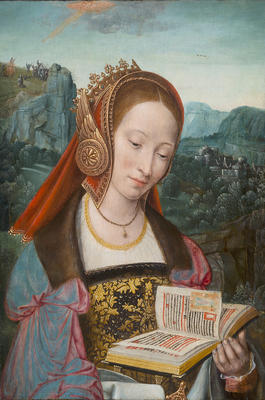 Further information
Catherine of Alexandria was a fourth century Christian saint. She wears a jeweled crown indicating her royal birth. As the patron of education and philosophy, she holds an open book to symbolize her reputation for knowledge and learning. According to legend, Catherine denounced the Roman emperor Maxentius and his followers for worshiping idols. Maxentius summoned his philosophers to refute Catherine's Christian statements, but her persuasive arguments immediately converted them to Christianity. The emperor ordered that Catherine be crushed by spiked wheels, but a thunderbolt from heaven destroyed the wheels, a scene in the painting's background. Maxentius then beheaded Catherine.

This painting was originally part of an altarpiece that included the companion painting of Saint Barbara (see 1955.13). Attributed to the Master of Frankfurt because of their similarity to his other known works, these paintings were probably located on the wings of an altarpiece with the images facing a central panel. The artist portrayed Saint Catherine in Renaissance dress instead of clothing appropriate for the fourth century. The two paintings may have been cut short, since most other figures by the Master of Frankfurt are full-length. 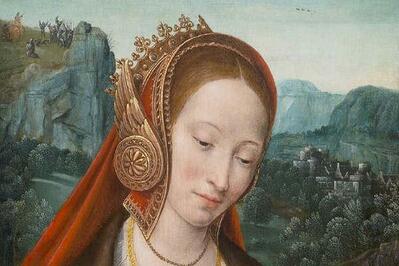