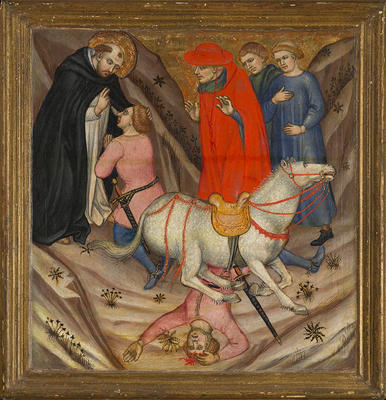 Media/Materials
Tempera and gold on panel

A young man, the nephew of Stephen the cardinal of [Fossa Nuova monastery], fell with his horse into a ditch and was killed. Being lifted out, he was laid at the feet of Saint Dominic, who prayed over him and restored him to life.

On the McNay's panel, scenes of the young man's death and revival appear in a continuous narrative.

Miracle of Saint Dominic was very likely part of a predella, the lower register of a large altarpiece. Solberg links the McNay's panel to similar predella panels, which traditionally show subjects related to larger figures of saints in the middle and upper registers.

The predominance of Dominican saints indicates the altarpiece was housed in a church of the Order of Preachers founded in the 1200s by St. Dominic. Over time, as churches refurbished their interiors, art dealers obtained discarded altarpieces and dismantled them for resale. Scattered to collections throughout the world, the altarpiece exists today as independent panels in separate collections.